The story revolves around two girls named Hatsune Iria and Utagawa Tori, who fight against the forces of Nemesis - an evil group who aims to destroy all music and bring Earth to its end. Nemesis uses their power in a form of energy that becomes a monster called "Kishiru" (キシル Kishiru), creatures that fight against the Pretty Girls.

To save music and Earth, Iria and Tori must learn to accept that they are magical girls and fight against Nemesis so they don't receive the two notes of light, Golden Staffs that are hidden somewhere on Earth and the two girls must found them before Nemesis does!

The season's motifs are music and legends.

Hatsune Iria (初音 イリア Hatsune Iria)
Iria is the kind, helpful heroine of the series. She is in the music club at school as a member and has an outgoing personality and has three friends. She loves to play the piano and the tambourine and has a habit of writing love letters to Kudo Seiji, who is her guy friend. Iria doesn't get very good grades but makes up for it with her marks in English and Music and her helpful personality. Her alter ego is Pretty Forte (プリティ フォルテ Puriti Forute) and with the help of her golden tambourine, Iria is able to perform powerful attacks.

Utagawa Tori (歌川 トリ Utagawa Tori)
Tori is the smart, popular heroine of the series. She is described to have a beautiful singing voice and is a member of the school choir. She is very good at playing the violin and the harp and has a stubborn personality. Tori is very smart and is tutored by her mother and is very rich. She has a lot of friends and is very kind to her peers. Her alter ego is Pretty Dolce (プリティ ドルチェ Puriti Doruche) and with the help of her silver harp, Tori is able to perform swift attacks.

Harmony (ハーモニー Hāmonī)
Harmony is the pink and gold mouse-like fairy who is Iria's mascot partner. She is very helpful like her partner and loves to sing, but is very bad at it, usually having a sock stuffed in her mouth when she starts singing. She is Symphony's best friend and she is kept has the pet mouse in Iria's household.

Symphony (シンフォニー Shinfonī)
Symphony is the blue and silver mouse-like fairy who is Tori's mascot partner. She is very shy and gets stage fright very easily but is helped by Harmony, Iria and Tori to overcome it. She is very calm and hardly gets angry. She is Harmony's best friend and she is known to be a fairy from a different world in Tori's household and is looked after like a normal human being. 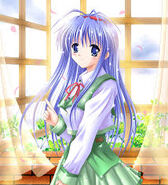