This Article is about the (Fanon) 4Kids dub of Madoka Magica. For the comic series reboot, see Magical Molly! (Comic Series)

"Magic is the true power of friendship."
―The slogan of the Japanese dub of Magical Molly

Magical Molly! is a TV series distributed by  4Kids Entertainment  & SHAFT. The series is the second English dubbed version of the popular  Anime series, Puella Magi Madoka Magica, and is targeted towards children rather than adults like the original series. Magical Molly! was introduced as part of 4Kids' "4Kids 4Ever!" lineup, an ill-fated attempt to bring back 4Kids' success in the late 90s and early 2000s. All anime shows in the lineup were targeted towards teenagers and adults in their original incarnation, such as Friends with the Titans (Attack on Titan) and SCISSORlaSCISSOR (KILLlaKILL).

The series' original airdate is intended to be at 2012, but it was pushed to 2013 instead.

Since December 2013, 4Kids dropped the license. However it doesn't stop the HUB reruns of the show, the comic series adaption, & the merchandising. (Same goes as the ask blog itself.) in 2014, Magica Quartlet currently owns the series' concept.

Molly Kelley, a normal schoolgirl, has her life turn upside down when she meets Cubey, an alien from outer space who can grant wishes to any girl. But, a Magical Girl called Hilda is trying to stop Molly from making that wish to Cubey...

The first 6 Episodes are "family-friendly" due to censorship. However the last second-half are totally dark and somehow serious (despite the censorship made), compared to the previous Episodes aired.

The Japanese version of the dub begins to air in Japan in 2014 via NicoNico Douga & Youtube (username:: MagicalMollyJP), making the redub's release as an ONA (Original Net animation). After the streaming, the series began to premiere in TV Tokyo, MBS, & AT-X, for a limited time only.

The redub's Opening is Colorful by ClariS (which is also the opening of the movie: PMMM - The Rebellion Story). The Ending theme is Connect (Orchestra ver.)

The 11th & 12th Episodes are delayed of airing in October due to the premiere of Madoka Magica: The Rebellion Story in Japan. The last two Episodes are to air this November.

Spells of Rebellion is a proclaimed finale trilogy of the dubbed series. the last 3 Episodes were retooled & dubbed from the popular film Puella Magi Madoka Magica: The Rebellion Story. The dub was finished, but it was taken down due to the finale trilogy being too graphic. The series' script & production notes were recoved from the guide book: Magical Molly! The Complete Works.

However unlike the other 4Kids Dubs, the censorship in this show was also took under control by SHAFT & Magica Quartet itself.

The series was redubbed in Japanese by SHAFT in 2014, under the title in the same name (マジカル☆モリー！Majikaru☆Morī!). Due to the fact that a straight 4Kids-style dub of Madoka would be even more unsuccessful in Japan, the show was dubbed as a semi-comedic parody of the original series and of American dubbing in general. This version is marketed towards fans of the original Madoka Magica rather than children, and attempts to slot itself into the continuity of the original Madoka Magica. Although most of the original Madoka voice actors return to their roles (save for Homura/Hilda), the characters retain their 4Kids dub names (though occasionally the original Japanese names are used in jokes). The Japanese version, in a bit of irony, is a more humorous version of the English dub. The script adds various jokes aimed at adult audiences and Madoka fans, similar to the American Yu-Gi-Oh! The Abridged Series, and also lampoons American dubs of anime and anime fandom in general. While all visual censorship is left intact, the characters often joke about their original uncensored fates (for example, there are numerous jokes about Mary losing her head in Episode 3).

Differences between the English and Japanese versions

Additionally, the Japanese dub of Magical Molly! ties into the canon of Puella Magi Madoka Magica, as explained in Episode 10. Here, it is revealed that the original Homura Akemi accidentally created Magical Molly! herself during one time loop during a witch chase by spilling coffee onto the laptop of a 4Kids executive who was about to license Rocket Monsters, a Pokémon-like children's series. The incident caused a bug with his computer that caused him to license Madoka instead, creating the Magical Molly! universe. The Japanese dub uses a small amount of new animation by SHAFT for these additional plot points.

In the final episode, Princess Molly becomes aware of the original Madoka Magica series, and decides to reset the timeline and erase the coffee incident, allowing the main canon of Puella Magi Madoka Magica to occur.

Amusingly, the Japanese dub was originally presented to the Madoka voice actresses as a straight re-translation targeted towards children, much to their dismay. But when they read the real script, they "had a lot of fun with it" in their own words, leading to lots of humor and ad-libbing.

Comparison between formats in different versions

In the Youtube Broadcast of the Japanese dub, ihe picture format is cropped into 4:3, and still retains the 16:9 picture format (But it adds the narrow pictures of the characters from the show (right) & the series' title (in Japanese) with the Episode titles in Japanese (Left). The NicoNico Douga Broadcast remains the same 16:9 Picture format.

Homages/References to the other 4Kids Dubs

The censorship in this series also paid tons of homages to the previous 4kids Dubs:

A Japanese manga adaption in the same name, illustrated by Gun-P (Mori Koichiro & Sakura Akami), serialized in Manga Time Kirara Magica with other mainstream Madoka materials. However the manga isn't made into a tankōbon (standalone book).

Additionally, a one-shot manga comic was released depicting an episode of Rocket Monsters, the show-within-a-show that 4Kids was supposed to license rather than Madoka Magica in the Japanese dub of Episode 10.

A Comic series in the same name, published by Magica IDW (Previously Magica Comics before it's merging with IDW Publishing). The comic's story is (somehow) similar to the original dub, but with different & all new storylines.

Compared to the 4kids dub, the series contains a fewer (sometimes many) references of Madoka Magica itself.

The series currently ran in 100 issues.

Two spin-offs was made based on the comic series: 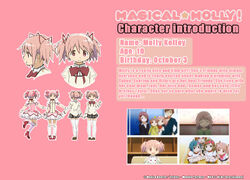 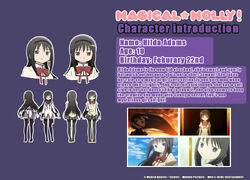 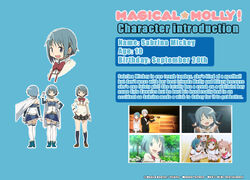 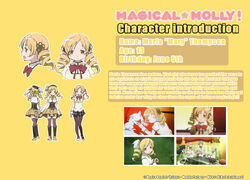 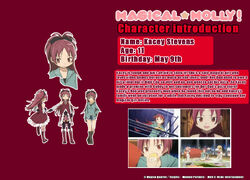 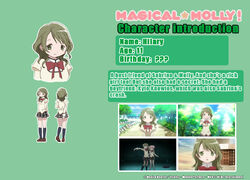 4Kids you are absolute scum, a disgusting rat of a corporation. How dare you. How DARE YOU! You have ruined the masterpiece that is PUELLA MAGI MADOKA MAGICA not Magical Molly. Not to mention other animes that you have tainted with your script changes which aren't true to the real works and the abominational editing. You have ruined countless anime series and now with this you have ruined the entire medium of anime. You are all vulgar maggots and a horrible company. You disgust me and I hate you

~A Tumblr user, in response to Magical Molly!

We apologize to all anime fans, young and old, for our poor treatment of our newest property, Magical Molly! From this point on, we will give Molly and her friends a brand-new face as a darker series that children and adults, boys and girls alike can enjoy.

Magical Molly was very poorly received by the anime fandom, due to the numerous edits and cuts made to the show, similar to 4Kids' other dubs including One Piece and Date A Live. Additionally, many of the disturbing scenes in the original were not properly edited out, thus scaring the show's target audience of children and leading to complaints from parent groups. Until the second half of the series was aired any say that, if not for Aniplex's pre-existing Madoka dub, the franchise would have effectively been buried in the West thanks to 4Kids.

"As usual, the series is magically horrible compared to their dub of One Piece."

"I think 4Kids entertainment had responded to many "What if 4Kids Dubbed X" jabs..."

Strangely the second half of the dub recieved mixed reviews, despite the censorship and Americanization. While still poorly-received by fans of the original Madoka Magica, casual viewers tended to enjoy the show more, as it took on a tone similar to 4Kids' own Teenage Mutant Ninja Turtles cartoon rather than its anime dubs. A similar occurrence happened with Breath Note, where instead of making people sneeze, the Breath Note caused people to come down with a severe, incapacitating cold, with the series attempting to emulate the original dark tone of Death Note.

Overall, Magical Molly!, along with Breath Note, Freestylin', Friends with the Titans, Casey and Friends, Kirsten's Splendid Journey, Stevey and his Robot Pals and SCISSORlaSCISSOR, resulted in a second round of financial losses for 4Kids. This caused them to cancel further marketing plans, including a "4Kids and Friends LIVE" touring stage show, and sell the rights to their anime dubs.

However, the Japanese version was gag-dubbed in a manner similar to the English-language Yu-Gi-Oh! The Abridged Series, and has become a cult favorite with Japanese and Western Madoka fans. This, in turn, has led to numerous unofficial English fandubs of the Japanese version, including one by LittleKuriboh himself and featuring a few of Aniplex's English Madoka voice actresses.

Despite this, the dub's soundtrack, composed by 4Kids Entertainment featuring Yuki Kajiura, recieved positive reviews. A fan slated the music is more better than the unfitting music used in the 4kids dub of One Piece & Mew Mew Power.

It was revealed that Magical Molly! is the 2nd most successful 4Kids dub after Pokemon.