Soda Can attached to a big hammer

Mazuiba is a teenage boy with one fang and wears a green jumper.

Mazuiba's hair is dyed magenta and is somewhat badly layered, but he covers it with a cap. 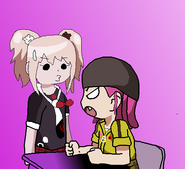 Add a photo to this gallery
Retrieved from "https://allanimefanonandfandoms.fandom.com/wiki/Mazuiba_Modi?oldid=33733"
Community content is available under CC-BY-SA unless otherwise noted.