No matter how much it takes, I will stop her for being tricked by Cubey!

Prelude is the 10th Episode of Magical Molly. It serves as the prequel of the series.

The Episode focuses on Hilda in her past life, before she learns the cold truth.

Hilda Adams, a shy and bashful young girl, discharged from the hospital after her treatment from the accident. One evening, she was attacked by a Witch’s minions, but she was rescued by 2 Magical Girls: Maria & Molly, and tells her the story about them becoming Magical Girls. After the Ultimate Clockwork Witch is defeated, Hilda decides to make a promise with Cubey, and becomes a Magical Girl. However, the dark secret is slowly unlocking in front of Hilda’s eyes…

Censorships/Changes from the Original Episode

This Episode's edits are pretty kinda sloppy. I guess they have spared this Episode, despite the censorship made...But, this is seriously the most darkest Magical Molly Episode. EVER. 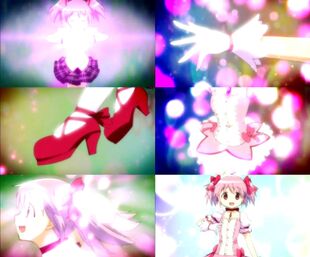 前奏曲：魔法少女の暗黒の秘密！(Prelude: The Dark Secret of the Magical Girls!)